This paper presents a nonlinear control strategy to solve the path tracking problem for a quadrotor unmanned aerial vehicle under perturbations. This strategy is based on the Generalized Super-Twisting Algorithm (GSTA); it means the second order sliding mode technique, which is able to ensure robustness with respect to modeling errors and bounded external disturbances due to the added extra linear correction terms. The controller goal is to achieve suitable path tracking of desired absolute positions and yaw angle while keeping the stability of the pitch and roll angle, in spite of the presence of disturbances and the handling of all system nonlinearities. In this work, a scenario in which velocities measurements are not available and are estimated by the Generalized Super-Twisting Observer is considered. Finally, the simulation results are also provided in order to illustrate the performances of the proposed controller.

Unmanned Aerial Vehicles (UAVs) constitute a field that has motivated the control community during the last years. UAVs are used in many applications such as, search, rescue, surveillance, aerial cinemato-graphy, inspection, and mapping. This paper deals with a four-rotor helicopter known as quadrotor, shown in Figure 1. The used quadrotor helicopter has some advantages over conventional helicopters on inspection task. They can take off and land in limited spaces and hover. The control of this machine is a great challenge, therefore, it is suited for the development and testing of new control strategies due to its high nonlinearity of its dynamic model [1]. Moreover, this system is under-actuated because it has six degrees of freedom while it has only four inputs (four rotors). It is not possible to control all of the states at the same time.

On the other side, several controllers have been developed to stabilize the attitude of quadrotors, such as, the feedback linearization method [2] or nonlinear control techniques like backstepping [1], [3],[4],[5] and [6], sliding-mode techniques [1], [3], 𝐻∞controller [7], sliding mode control driven by sliding mode disturbance observer [8], adaptive trajectory track-ing control algorithm [9], controller parameterized [10], super twisting control algorithm for trajectory tracking [11], [12], nonlinear adaptive state feed-back controller [13]. This paper deals with the design of a nonlinear control algorithm for the position and attitude tracking of the quadrotor taking into account nonholonomic constraints. Added to this, it is consi-dered the case in which velocity measurements are not available, then an observer is designed to estimate these variables based in GSTA. The GSTA is able to ensure robustness with respect to bounded external disturbances while reducing the chattering phenomenon caused by all first order sliding mode based controllers. This technique differs from conventional Super-Twisting Algorithm due to the introduction of extras linear terms, that provide more robustness and convergence velocity [14].

The paper is outlined as follows. In section II, the dynamic model of the quadrotor UAV is developed. Based on this nonlinear model, we design in section III, Super-Twisting Algorithm controller. In section IV an observer to estimate the velocities of the quad-rotor is designed. Some simulation results are carried out, allowing the analysis of the stability, robustness of the proposed controller in the presence of perturbations are presented in section V. Finally, section VI is a conclusion. The main contributions of this article are described as follows: Design of an attitude and position controller based on the Generalized Super-Twisting Controller. Design of a state observer based on GSTA for robust velocity estimation. Alternative stability proof for the GSTA.

The dynamic model helicopter has been described in several articles as seen in [1], [15] [16], [17], [18] and [19]. The absolute position and the attitude of the quadrotor are described respectively by 𝑋=[𝑥,𝑦,𝑧]𝑇 and the Euler angles 𝛩=[𝜓,𝜃,𝜑]𝑇, corresponding to an aeronaut-tical convention. The equation of the dynamics of rotation of the quadrotor will be: 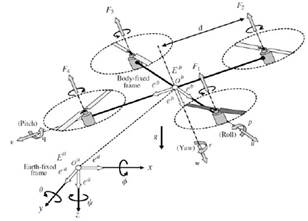 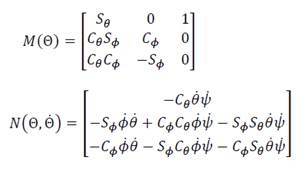 The orthogonal rotation matrix 𝑅(Θ) is defined as follows:

Where cos(∗)=𝐶∗ and sin(∗)=𝑆∗. The inertia matrix of the quadrotor is represented as 𝐽=𝑑𝑖𝑎𝑔[𝐼𝑥,𝐼𝑦,𝐼𝑧]. g is the gravity; the vector 𝑒3 = [0; 0; 1]𝑇; m is the mass of the vehicle; 𝑈 is the velocity of the quadrotor with respect to the air; 𝐴𝐹(𝑈) and 𝐴𝑇(𝑈) are respectively two complex non-linear functions vectors which represent aerody-namic forces and torques in the propeller system. Finally, 𝐹𝑝𝑟𝑜𝑝 and 𝑇𝑝𝑟𝑜𝑝 are the force and torque vectors in the system given by: 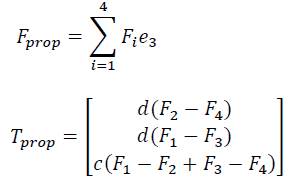 Where 𝑐>0 is the drag factor.

In this section, we design the controllers for the position and attitude of quadrotor using the Super-Twisting Algorithm.

From (2), we define the following state variables:

Then the state-space form of this model is given by:

For the design of control, the following assumptions are needed [1]:

Assumption 1. 𝑋,Ѳ,Ѳ̇ can be measured or estimated by on-board sensors.

Assumption 2. The quantity Σ4𝑖=1 represents the total thrust on the body in the z axis and is strictly positive to overcome the gravity.

Assumption 4. The desired trajectories and their first and second time derivatives are bounded. Assumption 5. The velocity 𝑈 and 𝑈̇ the acceleration of the quadrotor with respect to the air are bounded.

According to these assumptions, the matrix (5) is non-singular and the following inequalities are satisfied:

The controller is designed to enforce sliding mode [11] on the manifold:

The proposed control law is in the form:

Where 𝑠𝑔𝑛(⋅) denotes the sign function and is defined as:

From (1), we have the following state variables:

Let the state variables defined by: 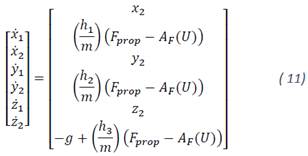 Following the methodology of the previous section, the controller is designed to enforce sliding mode on the manifold:

Where the position error and its derivative are defined respectively as 𝑟=[𝑥1𝑑−𝑥1,𝑦1𝑑−𝑦1,𝑧1𝑑−𝑧1]𝑇 and 𝑟=[𝑥̇1𝑑−𝑥2,𝑦̇1𝑑−𝑦2,𝑧̇1𝑑−𝑧2]𝑇 with Δ∈ℝ3×3 is a diagonal positive definite matrix. 𝐴𝐹(𝑈) is considered as a bounded perturbation.

From (12) the controller for 𝑧 is obtained as:

Note from (12) that is only possible to control the attitude of quadrotor directly due to the form of 𝐹𝑝𝑟𝑜𝑝, while the (𝑥−𝑦) control is done by modifying the Euler angles (𝜙−𝜃). Therefore, a first step in controlling the position of the quadrotor on the (𝑥−𝑦)axes, a virtual controller is proposed as follows:

From the equations above, 𝑈𝑧 only tends to zero when the helicopter is on the ground, therefore, the expression (17)-(18) is not indeterminate.

The next step is to find algebraic relations between virtual controllers and the Euler angles desired. From (11) without considering the effect of the given disturbance and maintaining the variable 𝜓𝑑 free, we obtained the following expressions:

In this section, the design of a state observer for estimating speed variables is shown. The high-order sliding mode observer to estimate the altitude velocity has already been implemented [20]. We propose a scenario where only the position variables (𝑥,𝑦,𝑧) are measured and their speed variables are not available, under this assumption is possible to recover exactly and in time finite with only the position measurement using the Generalized Super-Twisting observer [14]:

Where 𝜅𝑖 with 𝑖=1,6̅̅̅̅ are the gains of the algorithm and

allows obtaining an exact estimate as discussed below.

The proposed trajectory is a spiral whose three-dimensional parametric expression is given by the function:

The external disturbance in (1) is defined by

This external disturbance lasted two seconds in the span of 2 to 3 seconds as shown in Figure 2. A low pass filter with transfer function, 𝐿𝑃𝐹=10/(𝑠+10) (𝑠 is the Laplace variable) is applied to 𝜓𝑑 and 𝜃𝑑 in order to minimize the chattering effect in the references. The results show that the vehicle follows the desired path even in the presence of the large external perturbation.

The controller performance for the position and orientation of the quadrotor respectively are shown in figures 2 and 3. 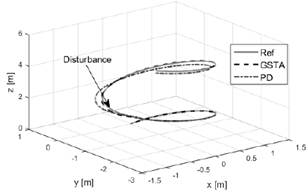 Fig. 2. Path tracking of the quadrotor.

Figures 3 and 4 show the orientation and the desired orientation of the quadrotor during the test maintaining 𝜓𝑑=0. 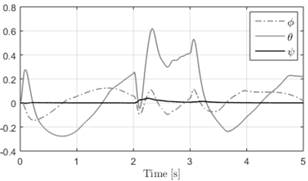 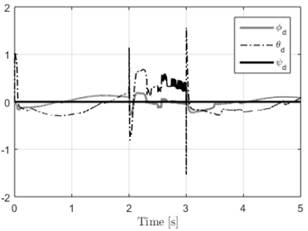 Figures 5 and 6. Also, the effect of the external disturbances is shown. From these figures we can see that the control signals have low amplitude chattering. 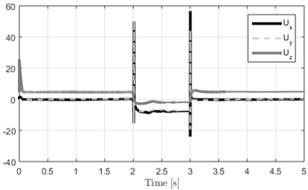 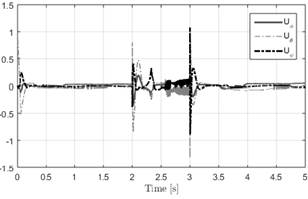 The Figure 7 shown the tracking error of the position controller. Also, these plots demonstrate that the position and the attitude of quadrotor are clearly affected by the external disturbance but the controller estimate the disturbance and compensate for it quickly such that the errors converge to zero.

Finally, Figure 8 shows the velocity estimation. From this plot we can see that the estimated velocities converge to the actual values despite the disturbance introduced in the test. 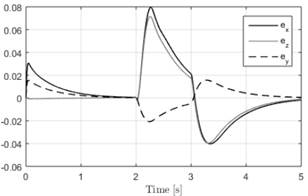 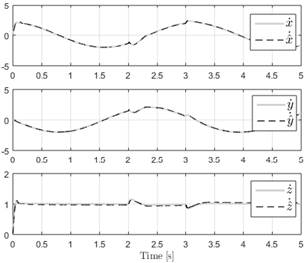 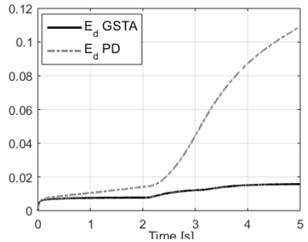 Fig. 9. Performance of the proposed controller and PD.

In this paper, a super twisting controller algorithm to solve the path tracking problem for a quadrotor has been presented. The controller has been designed using second order sliding mode approach in order to reduce chattering phenomenon and to ensure robustness with respect to external disturbances. The whole system was divided into six subsystems. Three of them represent the attitude of quadrotor and have implemented the super-twisting algorithm to stabilize the roll, pitch and yaw angles. The rest subsystems have implemented the super twisting algorithm too, in order to tracking control of quadrotor and taking into account nonholonomic constraints, it was possible modified the yaw and roll angles necessary for displacement on x and y axes. Also, it is assumed that the velocities are not available and were estimated by the Generalized Super-Twisting observer. The simulation results obtained on a quadrotor system show the effectiveness of the proposed controller in the stabilization, path tracking and disturbance rejection cases. 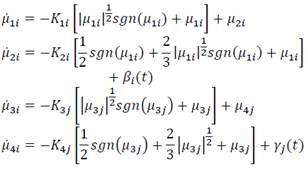 Without loss of generality, we can choose a single component of the system above and simplifying the notation as follows:

The Lyapunov candidate function is given by

Note that the proposed Lyapunov candidate function is a continuous, positive definite and differentiable function except in 𝜇1=0. This function can be rewritten in quadratic form 𝑉(𝜇)=𝜉𝑇𝑃𝜉 where 𝜉𝑇=[|𝜇1|1/2 𝑠𝑔𝑛(𝜇1),𝜇1,𝜇2] , then:

Where ‖𝜉‖22=|𝜇1|+𝜇21+𝜇22 is the Euclidean norm of ξ. The time derivative along the trajectories of the system is: 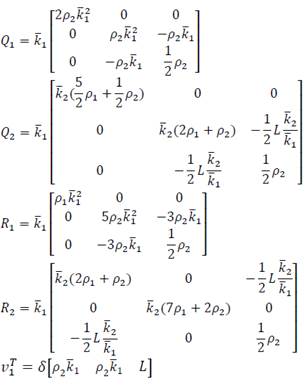 Suppose that the perturbation terms of (25) are globally bounded by Assumption 5. Then, the time derivative of the Lyapunov function can be rewritten as follows: 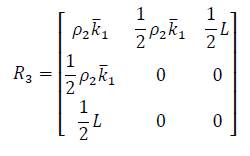 The solution is given by:

And using the comparison principle, the solution converges in finite time to the origin with 𝑇=2𝑉1/2(𝜇0)\𝜖 units of time.

[14] Moreno, J. A. Lyapunov approach for analysis and design of second order sliding mode algorithms, in Sliding Modes after the first decade of the 21st Century, pp. 113–149, Springer, 2011.